Disclaimer. After nearly 40 years managing money for some of the largest life offices and investment managers in the world, I think I have something to offer. These days I'm retired, and I can't by law give you advice. While I do make mistakes, I try hard to do my analysis thoroughly, and to make sure my data are correct (old habits die hard!) Also, don't ask me why I called it "Volewica". It's too late, now.
BTW, clicking on most charts will produce the original-sized, i.e., bigger version.

About 40 years ago--in 1978, I think--I was listening to a program on the radio about global warming, The program was on Woman's World on the SABC, and if I left work early enough I used to make a point of listening to it.  It was always interesting and even though it often discussed complicated and difficult topics it never talked down to its listeners.

At the end of the program the interviewer asked the scientist what we could do about the global warming he'd just warned us about.  His answer was very gloomy: every economic activity we did used fossil fuels, from switching on the light to growing our food.  You could almost hear the shrug.  And I remember thinking cynically, oh well, no one is going to do anything about it, then, are they?  No one is going to take a cut in living standards to prevent a future catastrophe.  And they didn't.  Since then, atmospheric CO2 has risen from around 330 ppm to over 400--and the trend is visibly accelerating.  Since then, global temperatures have risen 1 degree centigrade.  And again, to my untutored eye, the rate of increase in recent years has accelerated.

Yet, at about that time, some of the solutions to our fossil fuel dilemma began to be developed.  In Denmark, the first commercial wind turbine was built--and it's still operating, 40 years later.  It was built by volunteers with donated parts.  It's much less efficient than modern turbines. Its capacity factor (the amount of power it generates over a year compared to its nameplate or nominal capacity) was around 7%.  These days Danish wind turbines have capacity factors of 30%.  Today 45% of Denmark's electricity comes from wind.

And then, the first commercial solar panel was created.  It cost US$76,700 per kW in 1977. It would have cost  $384,000 to put 5 kW of solar panels on your roof, ignoring the costs of the transformer and the electrician.  Now, in Australia, you can put 5 kW on your roof for US$4000.  All inclusive.  Industrial scale solar has fallen even faster in cost than rooftop.

How did this happen?

It's called a "learning curve".  Hardly anyone could afford the first solar panels, but there were some uses.  Remote telephone substations.  Calculators.  (Remember those calculators with tiny solar panels which didn't need to be be plugged in because they charged themselves from the ambient light?)  Well, as sales increased, the costs fell, which led to further sales increases, and further cost declines.  The chart below shows how this process worked with the model-T Ford.   Now notice that this is a double-log scale.  Both the horizontal and verticals axes are logarithmic,  Every time cumulative sales rose 10-fold, the cost of the model-T fell a bit more than 25%.  Between 1909 and 1923 cumulative production rose from 10,000 to 10 million.  And the price, in real terms, fell from $3500 to $950. (Click on the chart to get a more readable version) 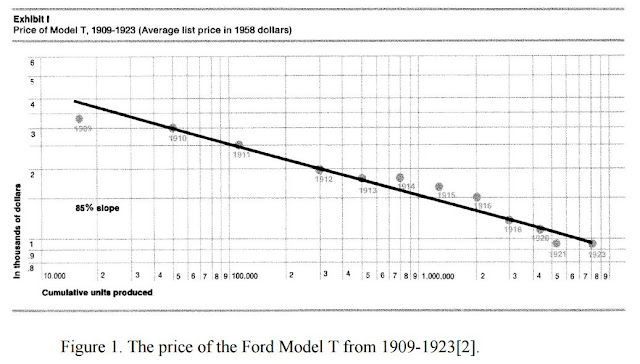 This is what happened and is still happening with wind and solar.  So solar costs have fallen from $76.70 per watt to under 50 cents.  And wind has fallen roughly 8 fold since the early 80s.  This isn't just more efficient manufacturing.  It's individuals and systems (including companies) learning how to do better.

So renewables started out much, much more expensive than fossil fuels,  After all, fossil fuels moved down their learning curve a century ago.  But two or three years ago, the cost declines in solar and wind finally reduced costs to below new fossil fuel plants.  Old generating plants are cheap because they're fully depreciated.  But they're also, by definition, old.  Which means they will have to be retired at some point.

So rapid and extensive have the cost declines been that in a middle-ranking developing economy like South Africa, wind and PV are now nearly half the cost of new coal.  And that's true in most places right around the world.  And the cost declines aren't over.  Wind is expected to fall another 24-30% by 2030 and 35-41% by 2050.  And wind is already cheaper than coal.  Solar is likely to fall 90% by 2030.  And solar (except near the poles) is already as cheap as or cheaper than coal.  Meanwhile, the costs of storage are also falling dramatically; not just battery storage but also concentrated solar power with molten salt storage (CSP).

Something else started in 1978: explosive growth in China.  In 1978, China was just 1% of the world economy.  Now it's closer to 20%.  Chinese stats are getting better but they're not exactly 100% accurate, so we're not 100% certain just how big it is.  But it's BIG.  For example, it's the largest consumer of raw materials in the world, and also the world's largest emitter of CO2.  It produces half the world's coal, and still needs to buy more.  China has contributed mightily to the rise in global atmospheric CO2.  And up until a few years ago, you could have complained that no matter what we did about reducing CO2 emissions, it would make no difference, because China's were exploding.

But that's changed.  China is the world's largest installer of wind and solar:

In 2009 at Copenhagen, the Chinese scuttled the climate change talks.  This time they were big supporters of the Paris talks.  So why the change of heart?

So what I see now, 40 years after I first heard about global warming, is that we have started an inexorable and irresistible shift towards a green energy system.  This shift is now being driven  not just by steady and sustained declines in the costs of renewables but also by public policy, because no one (except the venal or the demented) can deny that global temps are rising too fast for comfort.  And public policy is likely to get tighter and become more insistent and aggressive as global temps keep on rising.  Despite the denialists, the coal and oil barons seeking so hard to obfuscate the truth and to delay the switch, the vested fossil fuel and generating interests, the inertia and fear of change, the change will happen anyway.

That scientist from 1978 would be wrong if he were to say today that we use fossil fuels for virtually every economic activity we undertake.  We don't, and every year that goes by we'll use less.  One day, we won't use any.

No El Niño, yet hottest January ever

The last El Niño was in 2015/16.  During an El Niño event, heat that has been previously absorbed by the ocean is re-released into the atmos... 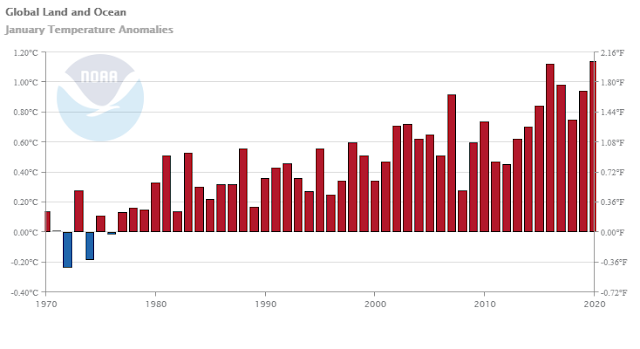